Public colleges charge lower in-state tuition rates for state residents, typically saving them one-third to two-thirds off of the cost of out-of-state tuition. 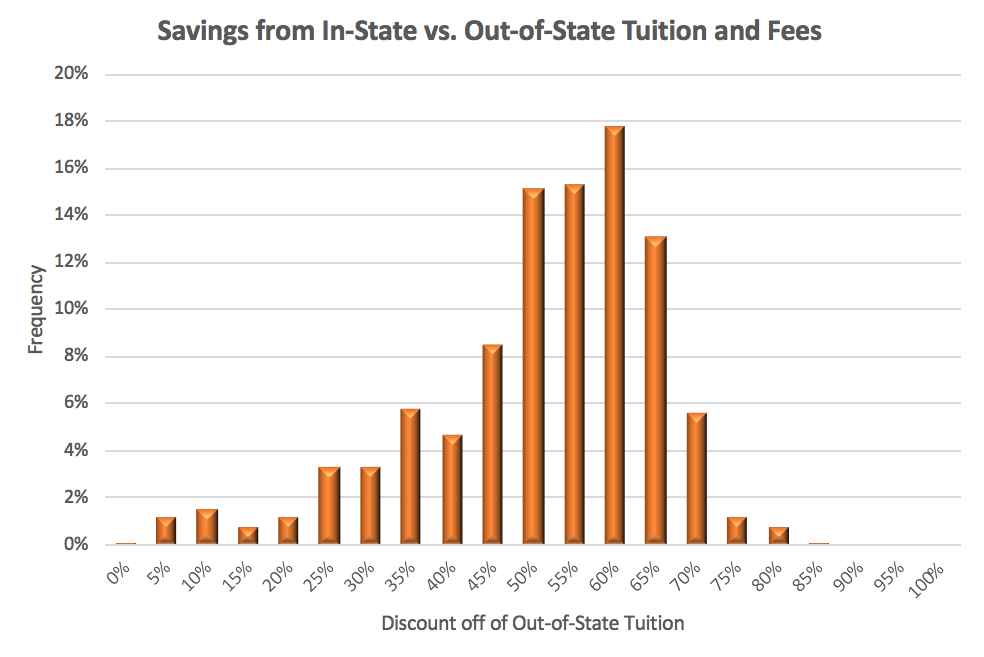 States have long lists of criteria for evaluating a student’s reason for relocating to the state is not just to save on college tuition. They want to be sure the student genuinely wants to become a long-term state resident.

Most states require the student to provide clear and convincing evidence that they have established a permanent domicile (a permanent home, not just temporary residence) in the state. This is a stronger evidentiary standard than a preponderance of evidence.

The durational requirements may be waived in certain circumstances, such as for members of the U.S. Armed Forces.

The reason for moving to the state must be for other than educational purposes.

The student must present clear and convincing evidence that they moved to the state for a reason other than qualifying for in-state tuition and that they intend to make the state their permanent home.

Another possible reason for moving to a state is to acquire or establish a business in the state. Evidence of this can include:

The student must also provide proof of state residence and domicile. Although the terms are often used interchangeably, a domicile is a person’s permanent home and a residence is a temporary home. A person can have multiple residences but only one domicile. People pay taxes and vote based on the location in which they are domiciled. Eligibility for in-state tuition is based on domicile, not residence.

No single type of evidence is considered conclusive proof of in-state residence and domicile.

Most states require the student to have been a state resident and physically present for at least one year (12 consecutive months consisting of 365 days) prior to initial enrollment or registration.

There are a few exceptions:

In all states, the period of residency must be continuous, without breaks.

North Dakota also allows former state residents who were domiciled in the state for 3 consecutive years within 6 years of enrollment to qualify for in-state tuition.

Time enrolled in a state college or university does not count towards satisfaction of the durational requirements, even if the student moved to the state for other than educational purposes.

Students are considered to be either dependent or independent. This is not the same as dependency status on the Free Application for Federal Student Aid (FAFSA). But, dependency status for determining whether the student is a state resident does depend on the sources of financial support to the student and the age of the student.

A legal guardianship must not have been established for the sole or main purpose of qualifying the student for in-state tuition.

If a student’s parent or legal guardian provides financial support to the student, the student is generally considered to be a dependent student for state residency purposes.

In Utah, if the student can be claimed on the income tax return of a non-resident, the student is ineligible for in-state tuition.

Some states will look back two or three years when determining whether the student is financially dependent on their parents or other relatives, even if the durational requirement for state residency is only one year.

Financial support includes not just the direct payment of money. It can include receiving student loans that were cosigned by a parent or other relative. It can include in-kind support, such as a parent paying the insurance premiums on the student’s car or providing the student with cell phone service. A trust that was established or controlled by a relative is considered financial support from that relative and demonstrates a lack of financial independence.

The student must also have reached the age of majority for the state or have court-ordered emancipated minor status to be considered an independent student. Some states have a higher minimum age requirement for a student to be considered independent.

Some states will allow students who have not yet reached the required minimum age to be considered independent if they are married, a graduate student or satisfy the requirements for independent student status on the FAFSA.

Any act inconsistent with being a state resident will cause the request for resident tuition to be denied.

Treatment of Undocumented Students and Parents

Exemptions to the Durational Requirements

Many states provide a few exemptions to the durational requirements, such as for members and veterans of the U.S. Armed Forces and their dependents, public college faculty and staff, public school teachers and marriage to a state resident. In addition to these criteria, there are also several unusual criteria for in-state tuition.

All states provide an exception to state residency requirements for members of the U.S. Armed Forces, their spouses and dependent children.

The member of the military must either be stationed in the state or have a home of record in the state. A copy of form DD-2058 may be required to verify the servicemember’s military state of legal residence.

If the home of record is in the state, the Servicemember may be required to file state income tax returns as a state resident.

Some states include members of the National Guard and Reserves within the scope of the military exception, some do not. Such states include Alabama, Alaska, Arizona, Colorado, Idaho, Missouri, New Mexico, North Dakota, Oklahoma, Tennessee, Utah, Washington and Wisconsin. Some require a minimum length of service, such as 2 years, which is longer than the durational requirement for residing in the state.

Arkansas and Oklahoma include ROTC scholarship recipients who have executed a U.S. Armed Forces service contract within the scope of the military exception.

Civilian employees of the military are not eligible.

Section 702 of the Veterans Access, Choice, and Accountability Act of 2014 (Choice Act) requires public colleges to provide in-state tuition to veterans and their dependents, effective for terms starting on or after July 1, 2015. If the college charges veterans and their dependents higher tuition and fees than for state residents, the college is ineligible for the Montgomery G.I. Bill-Active Duty and Post-9/11 G.I. Bill.

This law applies to veterans and their dependents (spouse and dependent children) who live in the state, even if their legal residence is in another state. The veteran’s dependents must use transferred veterans’ education benefits or the Marine Gunnery Sergeant John David Fry Scholarship to pay for the college. In all cases the student must enroll within three years of the veteran’s discharge or death in the line of duty after a period of active duty service of 90 or more days. Once enrolled, the student retains eligibility for in-state tuition so long as they remain continuously enrolled in the college, even if the 3-year enrollment window has ended.

Dependents include the veteran’s spouse and dependent children. Spouses include same-sex spouses. Children include biological and adopted children, as well as stepchildren.

Some states limit the exception to the college or university where the employee is employed. Some may provide additional tuition discounts for employees, their spouses and dependents. There may be reciprocity agreements with other colleges, including out-of-state colleges.

Generally, graduate student teaching and research assistants are not eligible, nor are medical residents, interns and fellows. However, Minnesota, Mississippi and New Mexico allow graduate students holding assistantships to qualify for in-state tuition.

Similar rules may also apply to public elementary and secondary school teachers and administrative staff, depending on the state. Such states include Alabama, Arizona, California, Florida, Georgia, Illinois and Nevada.

Connecticut and Wisconsin reduce the durational requirement from 12 months to 6 months.

California provides in-state tuition to the spouse and dependent children of full-time employees of any state agency.

Florida provides in-state tuition to full-time employees of state agencies and political subdivisions when the state agency or subdivision pays the cost, but only for job-related law enforcement and corrections training.

Some states will allow a student to qualify for in-state tuition if their parents moved to the state for retirement purposes. The parents must provide evidence of retirement, such as receipt of Social Security retirement benefits.

Marriage to a state resident does not automatically convey eligibility for in-state tuition in Delaware, Kansas, South Carolina. Eligibility for in-state tuition is determined separately for each spouse, although marriage to a state resident is a factor that can be considered as evidence of intent to make a permanent home in the state.

Louisiana and Mississippi waive the durational requirement if the student enrolls in a college from which their parent previously graduated. Children of graduates of the University of Alaska are eligible for in-state tuition.

Recipients of certain scholarships may be able to qualify for in-state tuition.

Some states provide in-state tuition to 529 college savings plan participants even if they do not currently live in the state.

Even if the student is classified as a non-resident the during the first year, they may apply for a change in residency status in subsequent years, if their circumstances change.

The most common example involves a parent moving to the state for a job and becoming a state resident.