Reauthorization of the Higher Education Act of 1965

Major changes in student aid policy occur when the Higher Education Act of 1965 is periodically reauthorized.

A difficult political environment and the complexity of the legislation contributes to delays between successive reauthorizations, as shown in this chart. Ten years passed between the 1998 and 2008 Reauthorizations. 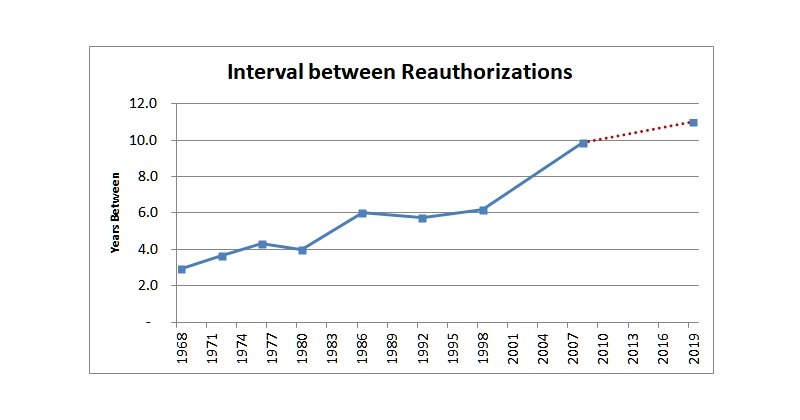 Split control of Congress prevents the passage of extreme, partisan legislation. Legislation can be enacted only with bipartisan support. Thus, split control of Congress helps shift the focus from politics to policy. Progress in passing legislation, however, is not certain, but there is a recognition by both parties that reauthorization of the Higher Education Act of 1965 is overdue.

The major legislative proposals include:

The minor legislative proposals include:

There are dozens of additional minor bills that are duplicative of these bills or which are unlikely to be incorporated into final Reauthorization legislation.

There are only a half dozen extremely contentious issues for which compromise might not be possible because the parties have polar opposite positions. These proposals might need to be omitted from the Reauthorization legislation for Reauthorization to occur.

The policy proposals that appear in the various pieces of legislation can give a sense as to the likely shape of Reauthorization.

There are numerous proposals that have bipartisan support. These issues fall into the following groups:

The most prominent partisan proposals fall into three groups:

Sen. Lamar Alexander (R-TN), chair of the Senate HELP Committee, is a strong proponent of simplification of the Free Application for Federal Student Aid (FAFSA). Financial aid experts believe that the length of the FAFSA, at more than 100 questions, is a barrier to college access by low-income students. The problem is not just with the form itself, but also with the process, which requires Pell Grant recipients to repeatedly prove that they are poor.

The legislative proposals would significantly reduce the number of questions on the FAFSA, basing the expected family contribution (EFC) on just income, household size and the number of children in college.

Among other changes, this proposal would eliminate the consideration of assets. A scaled-down version of the proposal would disregard 529 college savings plan accounts as assets and income on the FAFSA.

This proposal would also drop the questions concerning convictions for the possession and sale of controlled substances while receiving federal student aid.

Proposals for Reducing the Number of Loan Repayment Plans

Proposals for Interest Rates and Fees

Interest rates are increasing, causing concern among constituents. There is bipartisan support for eliminating interest capitalization on federal loans and for eliminating loan origination fees on the Federal Direct Stafford loan.

The two parties diverge on other proposals, such as

There is some evidence that undergraduate borrowers are reaching the loan limits. There is also concern about the potential for moral hazard in the unlimited nature of the Federal PLUS loan, especially in conjunction with Public Service Loan Forgiveness.

There are also proposals for repealing the Federal Grad PLUS loan and increasing the aggregate limit on the graduate Federal Stafford loan.

However, the loan limits for Federal Parent PLUS loans and graduate Federal Stafford Loans may be too low, forcing families to borrow from private student loan programs.

The legislation would allow financial aid administrators to reduce or prorate loan limits on a program-by-program basis, depending on the average starting salaries, enrollment status, degree level or year in school.

The new annual loan limits are shown in this table.

The new aggregate loan limits are shown in this table.

The main controversy involves defining the changes in loan limits as a new loan program in order to exclude Public Service Loan Forgiveness as an option for new borrowers.

There is bipartisan concern about the cost of public service loan forgiveness to the taxpayer. There has been a significant growth in costs, partly due to the addition of new income-driven repayment plans and partly due to the unlimited nature of Federal PLUS loans providing the potential for moral hazard.

There is, however, disagreement over the solutions. Some of the options include:

Generally, a lot of the discussion concerns “wealthy” graduate students, such as doctors and lawyers, getting most of the benefit. Other borrowers, such as social workers and public defenders, tend to be overlooked in the discussion.

There have also been discussions concerning ways to simplify the complexity of the program, improve the guidance and instructions to borrowers, expansion to include graduated repayment and extended repayment as qualifying repayment plans, reducing the number of qualifying payments from 120 to 60, and the tax treatment of the 20/25 year forgiveness under income driven repayment plans.

Despite the disagreement, there are opportunities for compromise.

College dropouts are four times more likely to default on their federal student loans than college graduates, and account for two-thirds of the defaults. A possible contributing factor is that most college graduates do not undergo exit counseling.

Student loan counseling can also be improved by personalizing it. Increasing awareness of debt is the first step in exercising restraint. Personalizing loan counseling involves providing borrowers with their current and projected loan balances and estimates of the monthly loan payments under a standard 10-year repayment plan.

H.R. 1635 demonstrated strong bipartisan support for improvements in student loan counseling, passing the U.S. House of Representatives on September 5, 2018 by a vote of 406-4.

Other legislative proposals demonstrate bipartisan support and are likely to be included in Reauthorization.

Other legislative proposals have not yet demonstrated bipartisan support, but may be included in Reauthorization.

Cohort default rates are prone to manipulation. Colleges and lenders can push defaults outside the measurement window by encouraging borrowers to use deferments and forbearances.

A proposed solution is to replace the Cohort Default Rate (CDR) with a Cohort Repayment Rate (CRR).

The CRR is the percentage of borrowers at an institution who reduce the principal balance of their loans by at least one dollar before the end of the second federal fiscal year following the fiscal year in which the borrower entered repayment. The CRR excludes borrowers who are in an in-school deferment or military service deferment.

Colleges with a CRR less than 45% will be subject to a 3-year suspension of institutional eligibility for Title IV federal student aid. The cutoff threshold will increase each year to 10% below the average CRR for the previous fiscal year, with a cap at a CRR threshold of 70%. There will be separate CRR thresholds for 2-year and 4-year institutions.

The proposal will phase-in the CRR over a three-year period, becoming fully effective in FY 2022.

CRRs provide several benefits over CDRs. They are less prone to manipulation than CDRs. CRRs provide a natural and uniform treatment for all loan statuses. CRRs measure progress in repaying student loan debt.

A key flaw with the CRR, however, is that it measures the percentage of borrowers making progress in paying down their debt, as opposed to the percentage of loan dollars. The Higher Education Affordability Act proposed the use of loan repayment rates that measured the progress and speed with which borrowers repaid their federal student loans after entering repayment. While this proposal was too complicated, it got the essential idea correct, which is to measure the percentage reduction in total loan dollars (including accrued but unpaid interest and capitalized interest), as opposed to the percentage of borrowers. Such a solution is more directly tied to the financial impact of loan repayment on the federal government.

Proposals for Improvements in Data Collection

It is difficult to evaluate student and institutional performance without adequate data. To improve data collection and analysis, legislative proposals would repeal the ban on a unit record system.

Instead, the National Center for Education Statistics (NCES) would be required to establish a secure and privacy-protected system that could be used to evaluate student level and aggregate data concerning enrollment patterns, progression, completion, post-collegiate outcomes, higher education costs and financial aid.

To facilitate this, the National Student Loan Data System (NSLDS) would be expanded to include private student loans.

There is a lot of disagreement among policymakers about changes in institutional accountability rules. Some of the same people who are calling for increased accountability, such as risk-sharing, are also in favor of less regulation of for-profit colleges. Nevertheless, there is a possibility that some of these proposals will be added to Reauthorization as the result of negotiation and compromise.

Most proposals concerning the Federal Pell Grant are non-controversial, but include many variations.

For example, the idea of a Pell Bonus has bipartisan support, but there are several variations on this idea. The key difference is who receives the Pell Bonus.

There are also proposals that do not increase costs, such as

A few proposals will increase the cost of the Pell Grant program:

There is also a proposal to repeal the Federal Supplemental Educational Opportunity Grant (FSEOG), implicitly rolling the funding into the Federal Pell Grant program.

The main concern is about the potential for fraud and abuse, as well as unintended consequences. Some policymakers have proposed rolling out competency-based education slowly, such as starting with a demonstration project to develop quality standards.

Title IX of the Education Amendments of 1972 prohibits discrimination on the basis of sex in federally-funded education programs. In addition to gender parity rules, Title IX also bans sexual harassment and sexual misconduct.

There are also numerous assorted proposals, the most significant of which include: 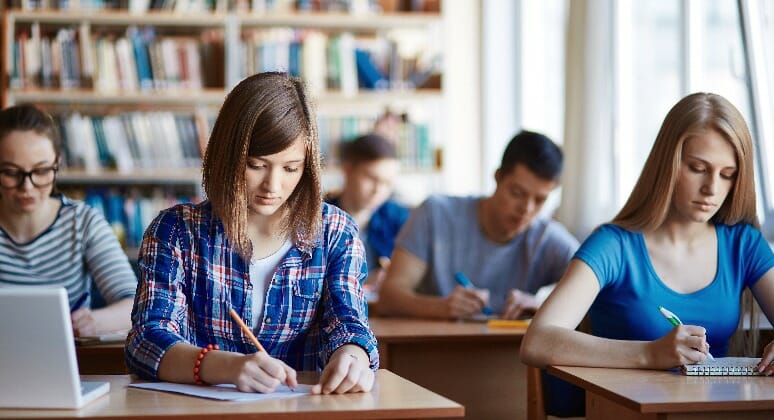