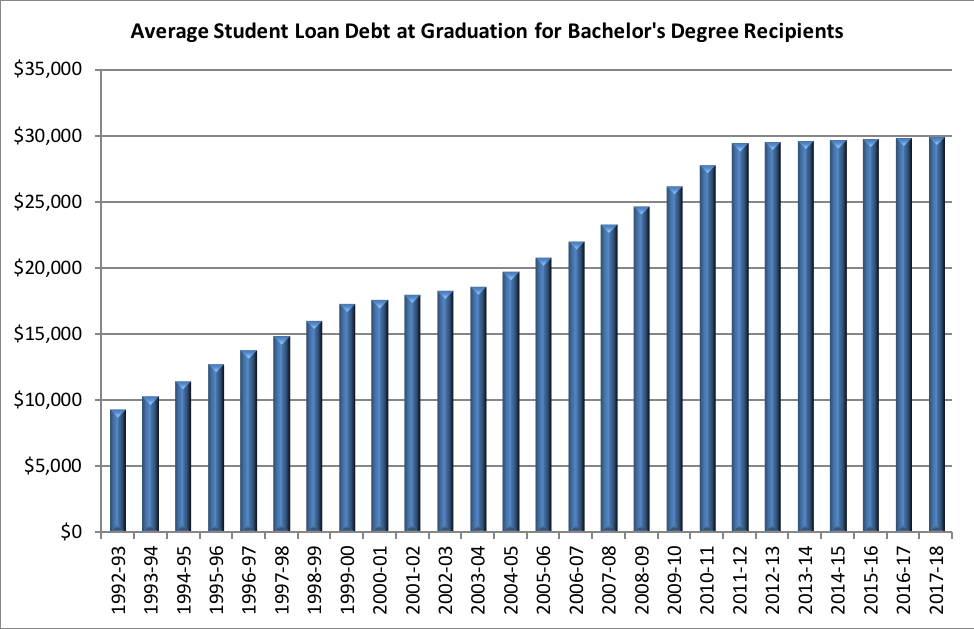 Increases in average student loan debt at graduation have slowed, based on an analysis of recently released federal government data. But, don’t start celebrating just yet. Borrowing has shifted from students to parents, especially at higher-cost colleges, because more students are reaching federal student loan limits.

Slow growth in debt at graduation for bachelor’s degree recipients

These statistics are based on data from the National Postsecondary Student Aid Study (NPSAS), a quadrennial study conducted every four years by the National Center for Education Statistics (NCES) at the U.S. Department of Education. The 2015-16  NPSAS surveyed 89,000 undergraduate students and 24,000 graduate students about how they paid for college.

Borrowing shifts from students to parents

More student loan borrowers are reaching these loan limits. The percentage of students reaching the limits on Federal Direct Stafford Loans increased from 39.3% in 2011-12 to 40.3% in 2015-16. As dependent students exhaust their eligibility for federal student loans, their parents are increasingly borrowing from Federal Parent PLUS loans.

If a parent has an adverse credit history, however, the parent will be denied a Federal Parent PLUS loan. If a dependent undergraduate student’s parent is denied a Federal Parent PLUS loan, the student becomes eligible for the higher Federal Direct Stafford loan limits available to independent students. The percentage of students benefiting from these exceptional maximums increased from 3.3% in 2007-08 to 5.8% in 2011-12 and 7.4% in 2015-16. 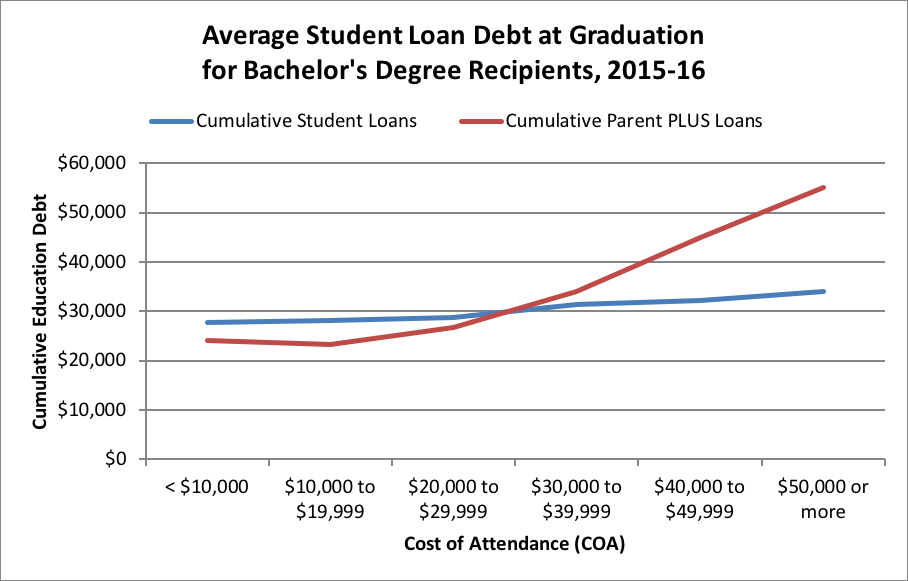 The average student debt at graduation continues to increase at lower-cost programs, such as associate degree and certificate programs.

The average student debt at graduation for bachelor’s degree recipients continued to increase at lower-cost public colleges while flattening out at higher-cost private colleges.

There’s also been a shift in enrollment from higher-cost colleges to lower-cost colleges. This table demonstrates an increase in the number of undergraduate students graduating with student loan debt at public colleges and decreases at private colleges.

This table shows the average student loan debt at graduation for graduate and professional school students. Graduate debt continues to increase for all but law school students. The increase in average debt for social workers and PhD students has been substantial.

As more students reach federal student loan limits, increases in borrowing will continue to shift from students to parents, especially at higher-cost colleges.

Congress is poised to increase undergraduate federal student loan limits by $2,000 per year as part of reauthorization of the Higher Education Act of 1965. This will shift some borrowing from parents to students, until the next time students exhaust loan limits.

Congress should consider indexing aggregate student loan limits to the average annual starting salary for recent college graduates at each degree level. Annual loan limits can be based on the student’s progress to a degree or certificate and the student’s remaining loan eligibility. This change will base loan limits on the borrower’s ability to repay the debt and the likelihood of degree attainment.