True, the likelihood of default increases as the amount of debt and the debt-to-income ratio increases, but this is not yet the dominant driver of non-performing loans. That’s why the average debt of defaulted borrowers is relatively low. Students who graduate tend to borrow more than students who drop out of college.

Currently, borrowing excessively to pay for college is more a matter of choice than a matter of necessity.

But, if current trends continue, average debt at graduation will exceed the average income of college graduates. As debt-to-income ratios grow, there will be a cascading effect on the next generation. Families will become more sensitive to the net price of a college degree and the return on investment.

The consequential shifts in enrollment patterns will force more colleges to close or merge, especially among small, high-cost, tuition dependent private colleges that are not well known nationally. Except for about 300 colleges, most colleges do not have significant endowments.

Thus, we will eventually have a student loan problem, probably within the next two decades. The time to deal with the problem is now, before the problem grows much worse.

For the last five decades, federal and state government support of postsecondary education has failed to keep pace with increases in college costs on a per-student, inflation-adjusted basis. This has shifted the burden of paying for college from the government to families. Since family income has been flat since the late 1990s, families have been forced to either shift enrollment to lower-cost colleges or to borrow more. Lower-income students have also been priced out of a college education.

At the same time, college enrollment has doubled, forcing colleges to do more with less. Increased student-faculty ratios and increased reliance on part-time faculty has affected the quality of education. The problem will become more acute as the K-12 pipeline of traditional college students continues to shrink. This will prevent colleges from compensating for cuts in government revenue by increasing enrollment, especially from full-pay students.

The only solution is for the federal and state governments to start paying their fair share of college costs, to ensure that a college education remains affordable. The government gains substantial financial benefits from higher education, through increased tax revenue. A college graduate pays more than double the federal income tax of a high school graduate because of higher income.

Increasing government grants or other financial support of postsecondary education will pay for itself within a bit more than a decade because of the increased tax revenue. Since most people work for 45 years, that yields more than 30 years of pure profit for the government, potentially enabling a future cut in tax rates. An investment in our greatest asset, our people, will yield the equivalent of a 14% annualized return on investment. It is not just a great investment. There is no better investment.

A student is said to borrow excessively for their college education when their total student loan debt at graduation exceeds their annual income after graduation. This is the equivalent of monthly student loan payments on a 10-year term exceeding 10% of gross monthly income.

Excessive student loan debt makes it more difficult for the borrower to repay their student loans within a reasonable amount of time, such as 10 years. It also causes delays in achieving other financial goals. Often, they must choose alternate repayment plans, like extended repayment or income-driven repayment. These repayment plans reduce the monthly student loan payment by increasing the repayment term.

This chart shows the percentage of Bachelor’s degree recipients each year who graduate with excessive student loan debt. Students who borrow more or earn less are more likely to graduate with excessive debt. This chart is based on data from the 1993-94, 2000-01 and 2007-08 Baccalaureate and Beyond (B&B) longitudinal studies and on data from a similar study conducted before 1993, the 1976-77, 1985-86 and 1989-90 Survey of Recent College Graduates (RCG). 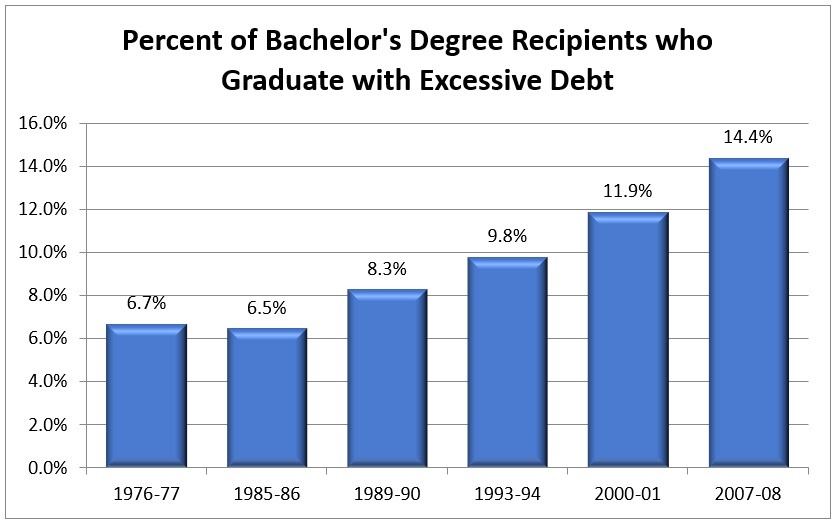 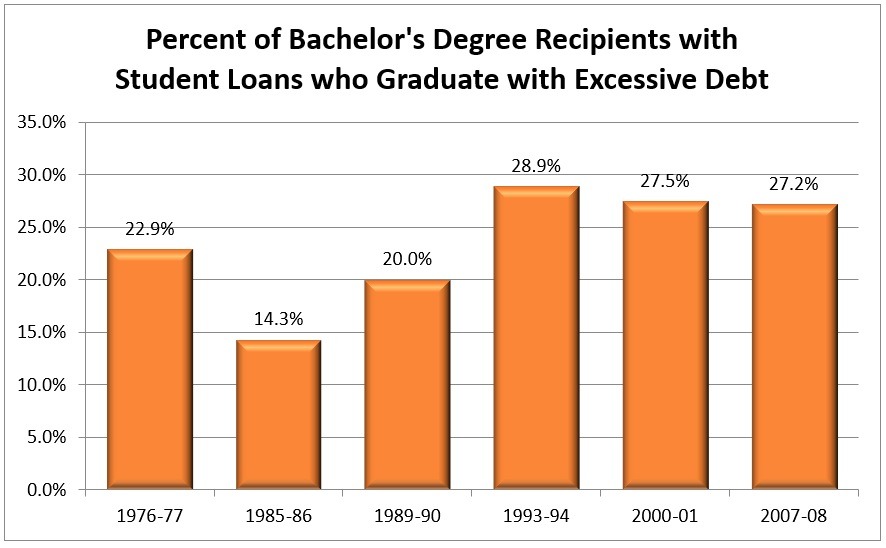 The result is a flattening out of the chart. Of those who borrow, slightly more than a quarter graduate with excessive student loan debt. This trend has been steady for two decades, suggesting that the growth in students graduating with excessive debt is due largely to the growth in borrowing and not due to increased recklessness. 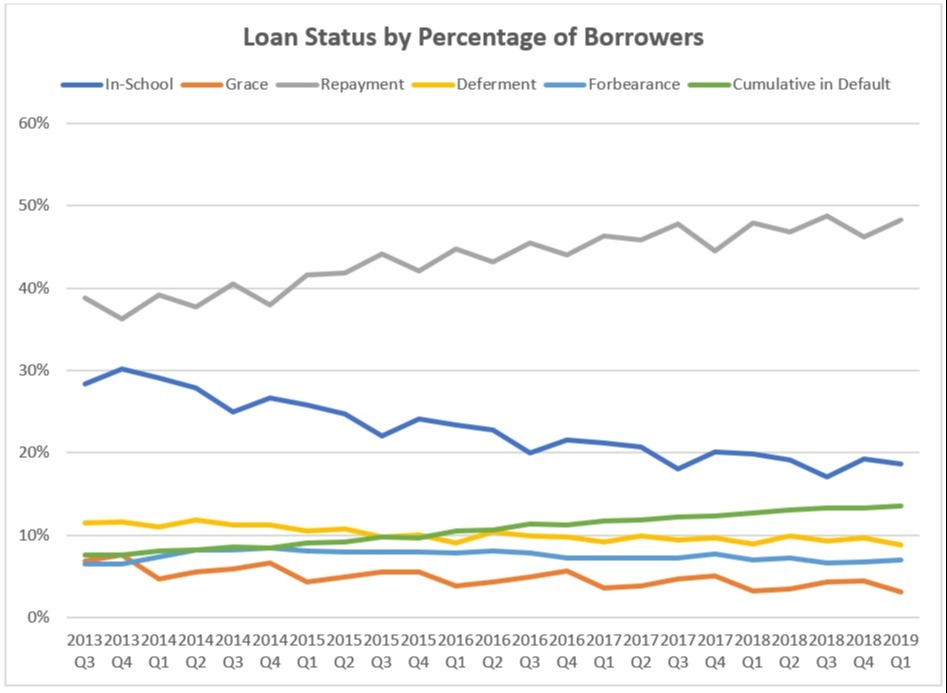 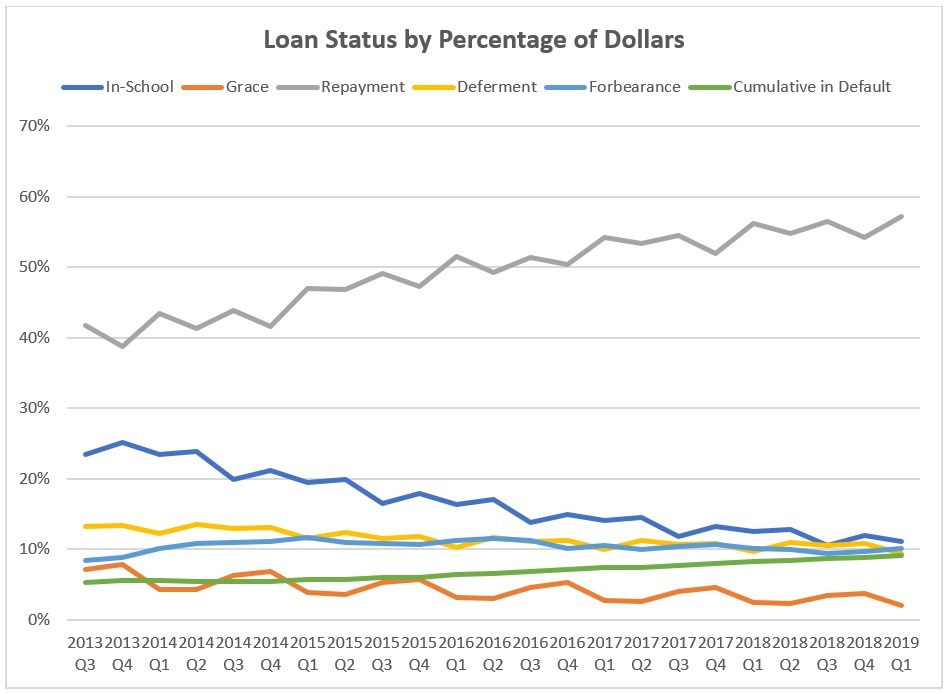 This table shows the distribution of loan dollars and the number of borrowers by loan status in the Direct Loan portfolio, based on data from the FSA Data Center for Q1 of FY2019. The Other category includes borrowers in bankruptcy or disability.

This table shows the distribution of loan dollars and the number of borrowers by loan status in the FFEL program portfolio, based on data from the FSA Data Center for Q1 of FY2019.

This table shows the delinquency status of loans in repayment for the Direct Loan portfolio, based on data from the FSA Data Center for Q1 of FY2019.

This chart, which is based on data from the Household Debt and Credit Report (Q1 of 2019) shows the percentage of loan dollars that is in a serious delinquency for various types of debt. 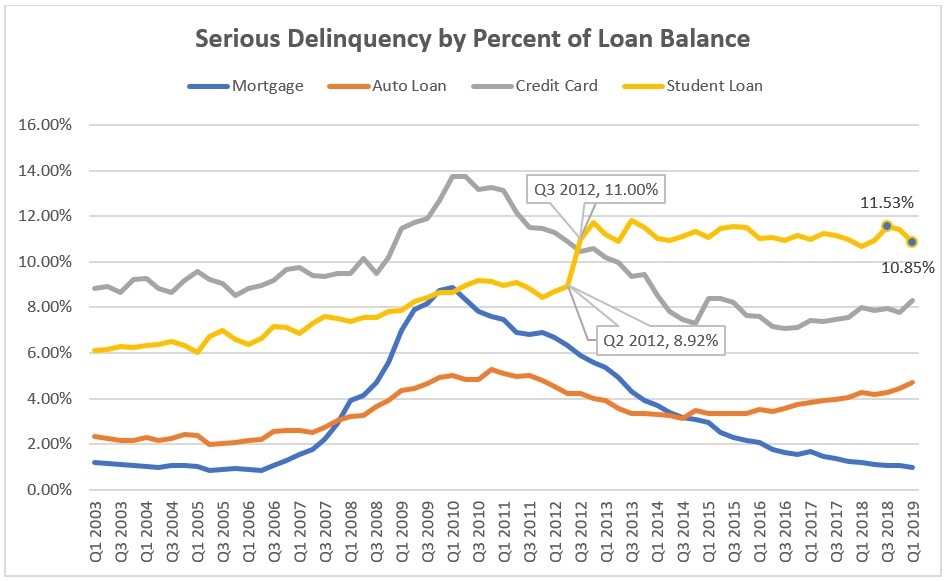 It is unclear what triggered this sharp increase in serious student loan delinquencies. Possibilities include 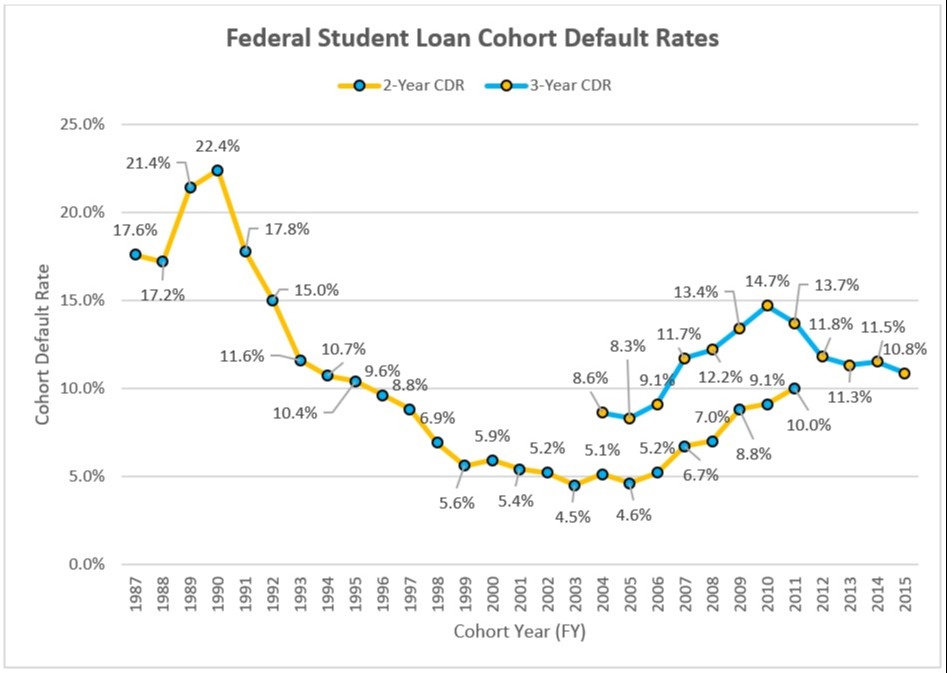 More than one million borrowers default for the first time each year. Of these, more than half defaulted within the first three federal fiscal years after entering repayment.

This table provides data concerning federal student loans in default as of Q1 of FY2019. Note that default rates are not comparable among the loan programs, as the mix of loans in each portfolio demonstrates a different aging. The loans in repayment limits the denominator to loans that have entered repayment, excluding loans in an in-school or grace period.

Note that the TOTAL line omits figures based on the number of borrowers because there is overlap among the borrowers in the three loan programs, with some borrowers having loans in more than one of the loan programs.

More than $10 billion in defaulted federal loans are recovered annually, with 72% recovered through rehabilitation, 14% by consolidation, 9% by wage garnishment and 5% by voluntary payments.

Despite the trends in cumulative defaults, very few borrowers who graduate with a Bachelor’s degree default on their federal student loans. Based on data from the 2012 follow-up to the 2008 Baccalaureate and Beyond Longitudinal Study (B&B:08/12), the overall default rate for Bachelor’s degree recipients is 1.76%.

Thus, there really isn’t a student loan problem, so much as a college completion problem. College dropouts have the debt, but not the degree that can help them repay the debt.

Nevertheless, the likelihood of default increases with the amount of debt and with higher debt-to-income ratios. So, even though we do not currently have a student loan problem, debt levels will eventually grow high enough to cause a significant increase in default rates even among college graduates. 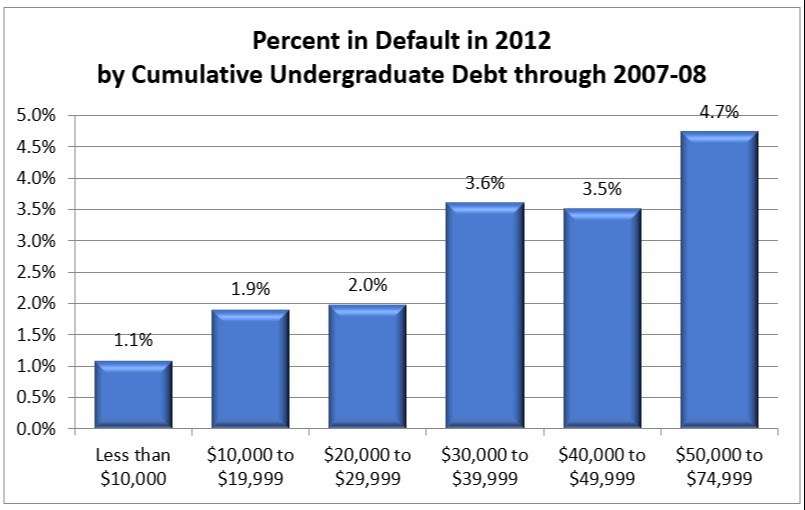 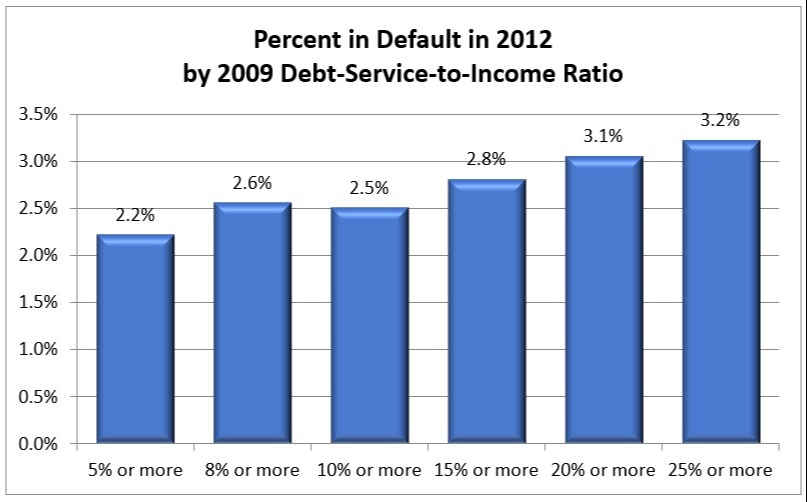 This table shows the distribution of Direct Loans by the type of deferment, based on data from the FSA Data Center in Q1 of FY2019. More than 90% of deferments are for borrowers in an in-school or grace period.

This raises concerns because PAYE is a superior repayment plan to REPAYE for all borrowers who are eligible. Even IBR may be better than REPAYE for some borrowers because IBR has a cap on the monthly loan payment and does not have a marriage penalty like REPAYE. The U.S. Department of Education may have been aggressively promoting the REPAYE repayment plan instead of PAYE and IBR because it is less expensive for the federal government, even when it is not in the borrower’s best financial interest. 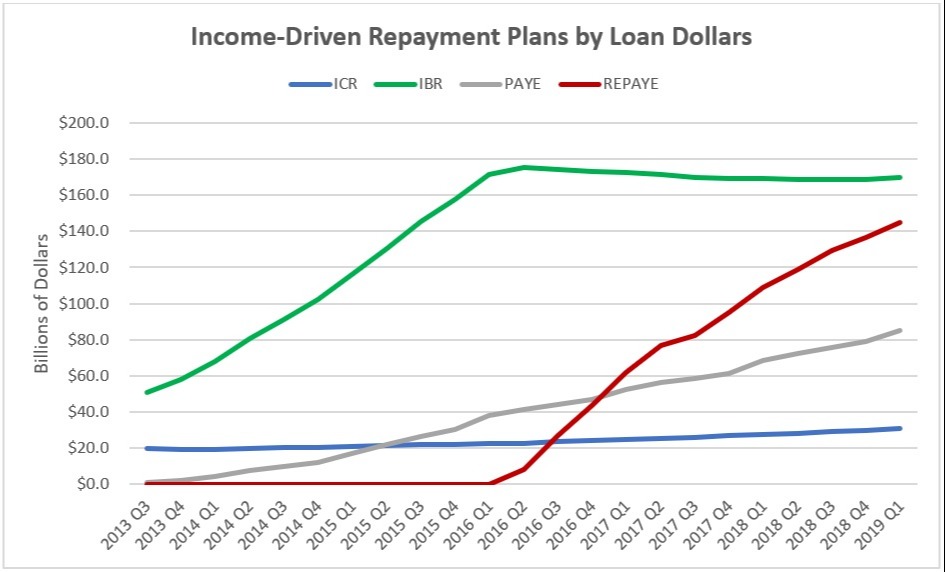 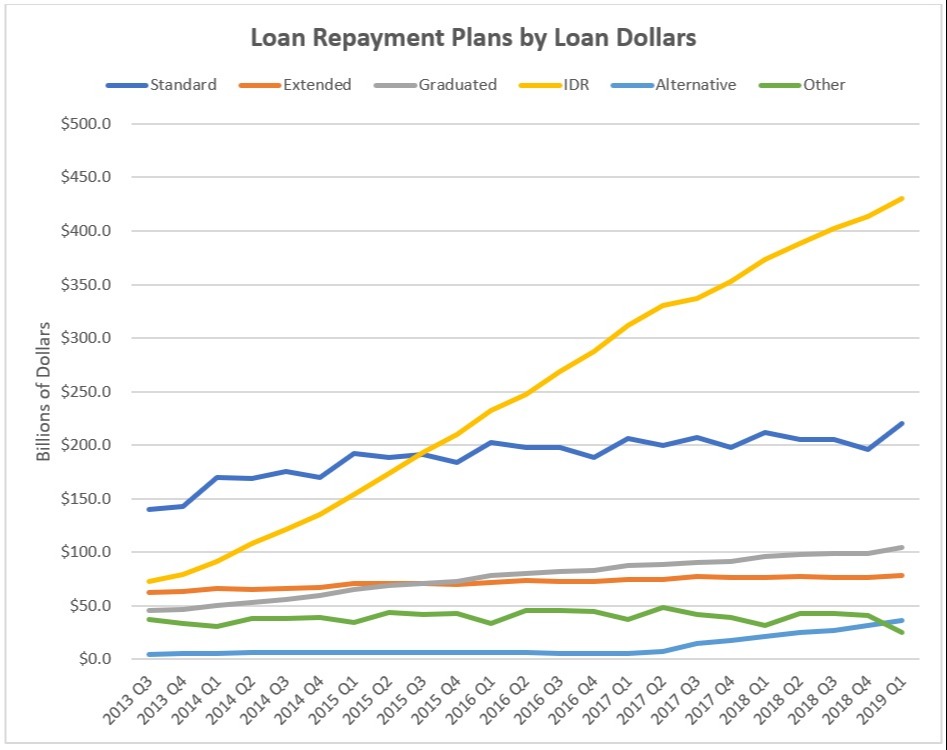 According to the U.S. Department of Education, the reasons for rejection include:

To qualify for TEPSLF, the borrower’s application for PSLF must have been denied. The borrower must satisfy all of the other requirements for PSLF, such as having eligible loans, qualifying employment and 120 qualifying payments. However, borrowers can have been in other repayment plans, such as extended repayment and graduated repayment, so long as the most recent payment and the one 12 months prior are at least as much as would have been required under an income-driven repayment plan.

The reasons for rejection include:

Impact on the Next Generation

When current college graduates choose repayment terms of 20 or more years, it means that they will still be repaying their own student loans when their children enroll in college. This reduces the likelihood of their saving for their children’s education. It also affects their willingness to borrow to help their children pay for college.

There are several ways that a current college graduate can have a repayment term of 20 or more years.