The Complexity of Payroll Withholding for Student Loan Payments

Senator Lamar Alexander has proposed automatically deducting student loan payments from borrowers’ paychecks. This is an elegant idea that would save the federal government about $1 billion a year in collection costs. Payroll withholding of student loan payments isn’t as simple as it might seem initially, but the problems aren’t insurmountable.

Under Senator Alexander’s proposal, borrowers would have a choice of two repayment plans, an income-driven repayment plan and standard repayment.

A key challenge is the amount of information that would need to be made available to the borrower’s employer.

Sharing the borrower’s AGI with the employer represents a security risk in addition to an invasion of privacy. The IRS uses the previous year’s AGI to authenticate the identity of taxpayers who file federal income tax returns online. It would be difficult to provide this information to employers in a secure manner. Hackers could use this information to commit tax refund fraud.

Base Withholding Solely on Earned Income

Instead, the withholding should be based solely on the borrower’s earned income. This information is available to the employer, allowing the employer to calculate how much to deduct from each payment without reference to external information.

This would require the poverty line to be based on a fixed set of assumptions, such as a family size of 1 and a location of the continental U.S. Or, the actual family size could be reported by the borrower to the employer.

The calculation of discretionary income would be normalized based on paycheck frequency.

Withholding Frequency Based on Paycheck Frequency

The loan payments would be withheld from every paycheck, just as federal, state and local income taxes are currently withheld. Employers would be required to deposit the withholdings with the IRS at a predetermined frequency – semi-weekly or monthly – regardless of the frequency chosen for paychecks, the same as for tax withholding. The payments would be transferred from the U.S. Treasury to the U.S. Department of Education, who would apply them to the loan balances.

Borrowers who are self employed would need to make monthly or quarterly loan payments, just as they currently are required to make periodic estimated tax payments.

Deferments and forbearances would occur naturally, as a consequence of the design of the income-driven repayment formula. If the borrower is on unpaid medical or maternity leave, there would be no income and therefore no withholding.

Similarly, if the borrower loses his or her job, the monthly payments would naturally be suspended because unemployment compensation is typically less than 150% of the poverty line.

With regard to standard repayment, a simpler solution is to allow borrowers to choose any payment amount that is greater than the income-driven repayment amount. This would allow borrowers to choose to repay their student loans even faster than standard repayment, if they wish. It is consistent with the lack of prepayment penalties on federal education loans.

Allowing the borrower to choose a higher loan payment would address the scenario where a borrower works two jobs. The calculation of the monthly payment effectively subtracts 150% of the poverty line twice, once for each job, leading to under-withholding. To avoid the need for an annual reconciliation process, the borrower could increase the amount withheld to compensate. This would be the equivalent of increasing the withholding by about $72 on a bi-weekly basis or $156 on a monthly basis, given the current poverty line for a family of one.

Basing the loan payments solely on earned income would eliminate the need for a complicated annual reconciliation process, by matching the repayment obligation to the amounts withheld.

The savings from the reduced need for loan servicing and collection agencies should be sufficient to compensate for basing loan payments solely on earned income.

To address policy concerns about borrowers whose compensation is largely based on unearned income, such as capital gains, interest and dividends, there might need to be an annual reconciliation process for people who earn more than a threshold amount of unearned income. This threshold would need to be high enough so that most borrowers would not need to undergo an annual reconciliation process.

Automated payroll withholding of student loan payments would be better for borrowers who otherwise would default, since it avoids the financial ruin that accompanies default.

The federal government and borrowers would save about $1 billion a year in collection costs.

The Right to Default on Student Loans

Some public policy proponents have argued, in effect, that borrowers sometimes need the flexibility to choose to default on their student loans. They criticize payroll withholding of student loan payments as prioritizing student loan payments ahead of other expenses, leaving the borrower with insufficient income to cover basic living expenses, such as food, rent, utilities and medical care.

This argument overlooks the fact that the loan payment under income-driven repayment is a percentage of discretionary income, which subtracts 150% of the poverty line from income. The protected portion of income should be sufficient to cover the cost of basic living expenses. Plus, the borrower is still level with 90% of discretionary income.

The argument is also specious because a borrower who defaults on their federal student loans will be subject to administrative wage garnishment (AWG), which is greater than the amount that is withheld under the income-driven repayment plan. 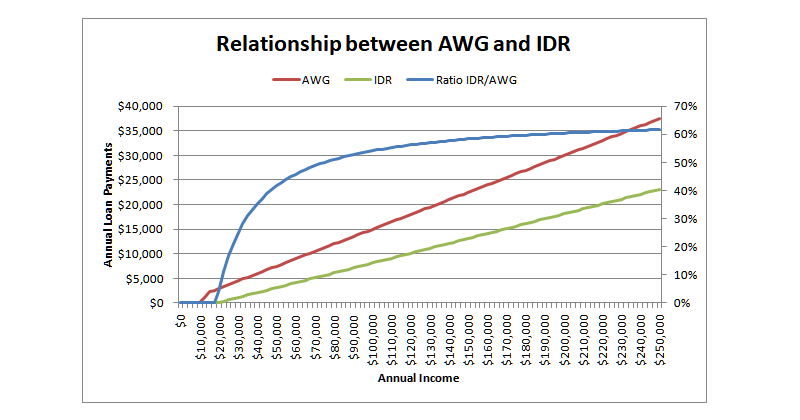 As this chart demonstrates, the amount withheld under administrative wage garnishment is always less than the amount withheld under income-driven repayment. The payments under income-driven repayment are less than half of the payments under administrative wage garnishment for incomes up to $75,000 and less than 60% for incomes up to $200,000.

Should You Refinance Federal Student Loans? What to Consider