A tuition reset is a one-time reduction in a college’s tuition rate, usually accompanied by a cut in financial aid. The college’s net price usually does not decrease by much. However, the unusual nature of a tuition cut, especially if it involves a large percentage or large dollar reduction, yields news media coverage that can attract more applicants for admission and a larger class size without compromising on quality. After the cut, the college’s tuition increases each year at typical rates.

Thus, the shift away from a high-cost/high-aid model can lead to an increase in enrollment that can improve a college’s finances.

Number of Colleges with Tuition Resets

A total of 91 colleges have implemented 95 tuition resets from 1987 to 2018, based on press releases and data from the Integrated Postsecondary Education Data System (IPEDS). Three colleges spread the tuition resets over two adjacent academic years, while one college followed a 30% tuition cut in 1999-2000 with a 25% cut 20 years later. An additional five colleges have implemented tuition cuts in 2019-2020 so far. 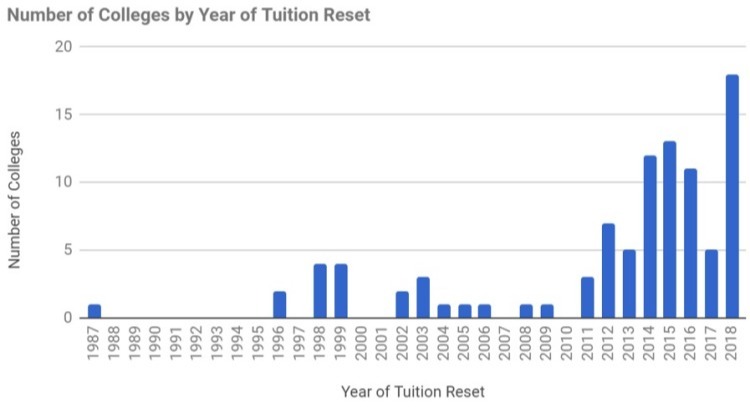 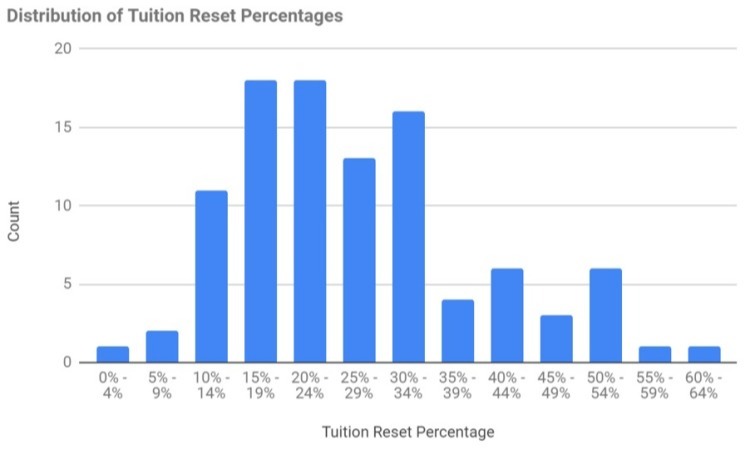 More than 93% of the colleges were nonselective, accepting 40% or more of their applicants. More than four-fifths of the colleges have a yield of less than one third of admitted students. This makes it challenging for the colleges to increase tuition revenue by accepting more students, especially full-pay students.

The colleges are small, with 77% having total enrollment under 5,000 students. More than a third have less than 1,000 students.

Almost all of the colleges award Bachelor’s degrees or more advanced degrees, with only 2% awarding only Associate’s degrees.

Most of the colleges are tuition dependent, without big endowments.

Most of the colleges recruit their students regionally, and are not well-known nationally.

The Chivas-Regal Effect occurs when increasing the price of a product or service increases demand for the product. In the context of college pricing, families assume that a college is better quality just because it costs more.

For example, a private non-profit college that charges $50,000 a year might offer full-pay students a $10,000 “merit” scholarship, discounting the net price to $40,000. These students prefer the private college over a less expensive $30,000 public college because the public college doesn’t award them a $10,000 scholarship.

But, the Chivas-Regal effect loses its luster when most colleges charge prices that are about as much as a small mortgage.

Some of these colleges discover that they are on the wrong side of the Laffer Curve. They can increase enrollment and total revenues by cutting tuition (and financial aid). The net price does not change by much, but the tuition reset attracts students who did not consider the college because of the high sticker price.

The colleges remain expensive after a tuition reset, just not as highly expensive as before.

All of the colleges that implemented a tuition reset now charge a cost of attendance of $15,000 or more, as shown in this table, compared with 59.5% of all public and private non-profit 4-year colleges, according to the College Board’s Trends in College Pricing. More than two-thirds of the colleges (70%) charge $30,000 or more. However, only 18.5% charge $50,000 or more. 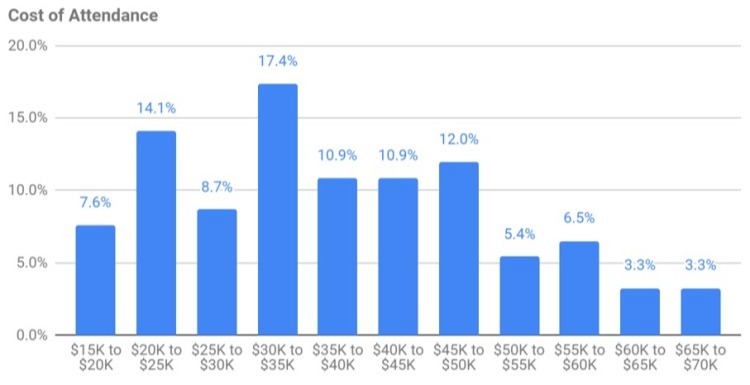 This table lists the colleges that have implemented tuition cuts. Most of the cuts were unrestricted, with just a handful of the cuts limited to low-income students, specific programs, state residents or out-of-state and international students.

Only two of these colleges subsequently closed.

How Many Colleges Could Implement a Tuition Reset?

A total of 273 private non-profit 4-year colleges satisfy these criteria. To be sure, determining whether a tuition reset will be effective requires a deeper analysis, especially of the competitive environment. Also, a tuition reset might not be a good fit for the college’s strategic goals. But, more colleges are likely to implement tuition resets as they face enrollment and financial challenges.