New data from the National Association of Colleges and Employers (NACE) shows average starting salaries of students who graduated with a bachelor’s degree in 2017 are up slightly from the previous year. These figures can help parents determine how much they need to save for their child’s future college education.

Top paying degrees for the Class of 2017 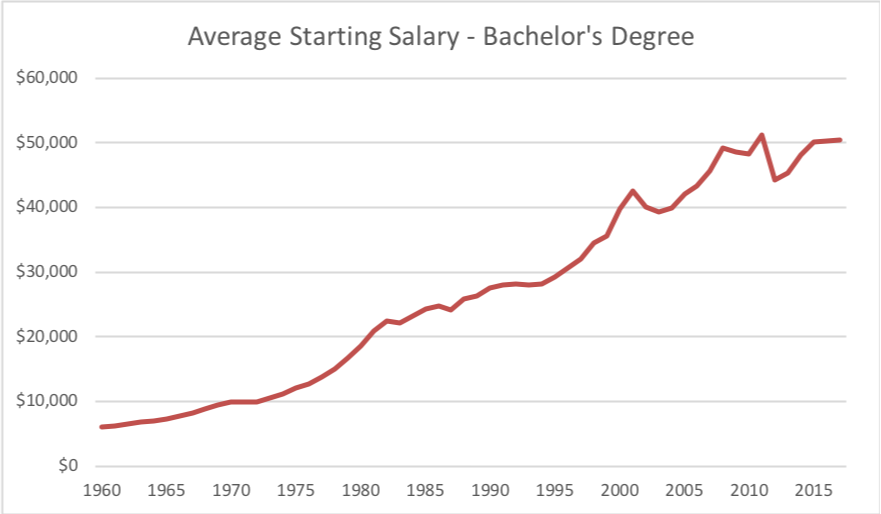 Computer science majors topped the list of highest average starting salaries for the third year in a row, at $72,677. New grads with degrees in health sciences earned $53,872, and had the largest increase in average salaries, up 7.5% from 2016.

Class of 2017 graduates with degrees in social sciences earned below average salaries, starting at $46,707. This was slightly lower than their 2016 starting salary of $46,749.

Data on starting salaries can help parents save for college

For parents of college-bound children, a smart goal is to aim to save one-third of total projected college costs. The remaining two-thirds would be covered by current income (including scholarships) and student loans (future income). However, to keep loan payments manageable, students should borrow no more than what they expect to earn during their first year after college. This is why it’s important to have an idea of what the starting salary will be.

For example, if you expect your five-year old child to one day attend a four-year, private non-profit college, you will be looking at total projected costs around $261,000. Based on the one-third rule, you should aim to save at least $87,000, and (when the time comes) borrow no more than $87,000.

How a 529 plan can help you meet your savings goal

A 529 plan is an investment account that allows earnings to grow tax-free, so parents with younger children have time on their side. Withdrawals from a 529 plan will also be tax-free as long as the money is used to pay for qualified education expenses.

A parent with a five-year old child will need to put away around $487 per month to save $124,000 for college. Saving this amount will help keep future student loan payments manageable. As your child gets closer to college you may need to adjust your strategy based on current starting salaries at that time. Use a college savings calculator to help you stay on top of your goal and determine how much to put away each month.